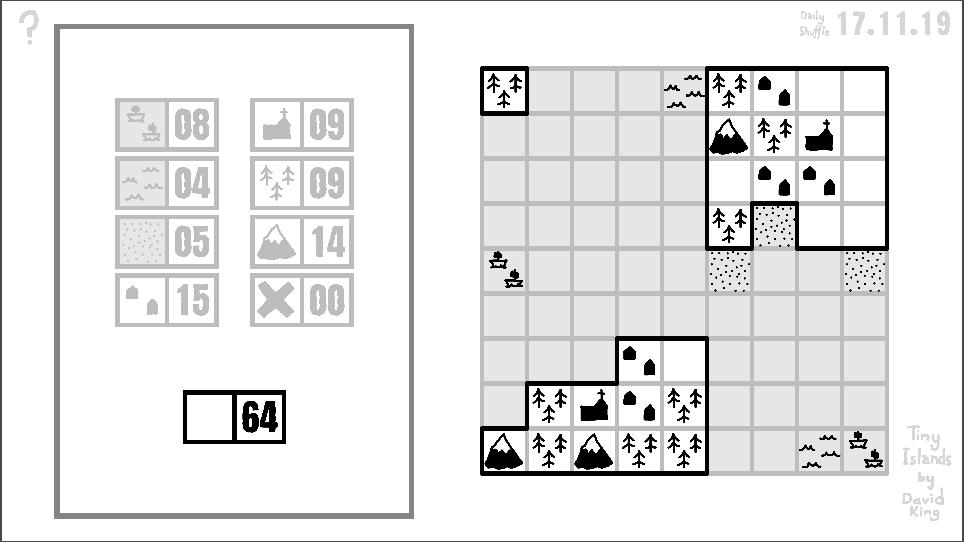 On my phone I get several warnings that Unity WebGL isn't supported on Android, but if I click through it seems to works fine, with the exception that the window is scaled too large and overflows the screen.  Seems like something that might be relatively straightforward to fix? 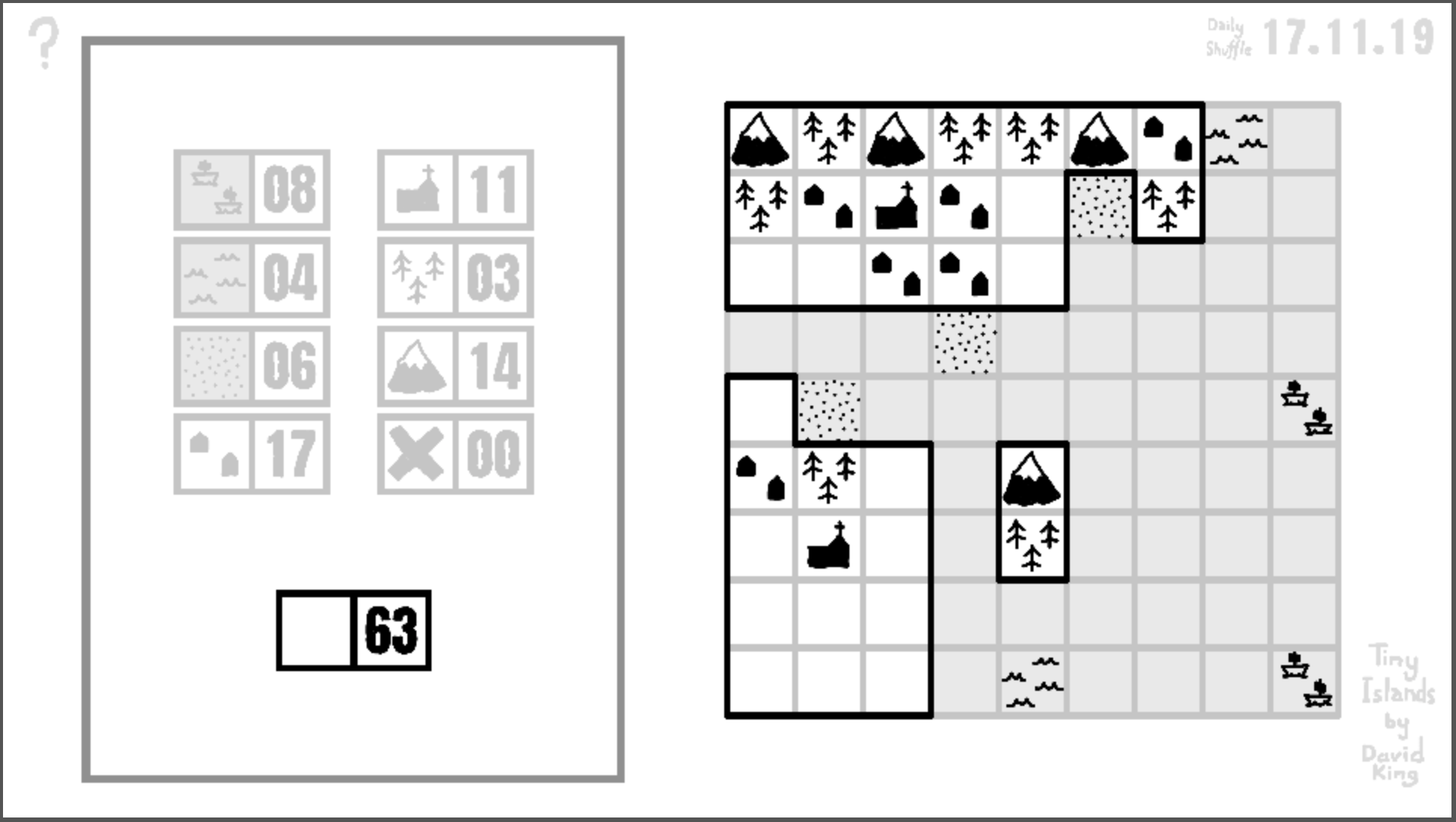 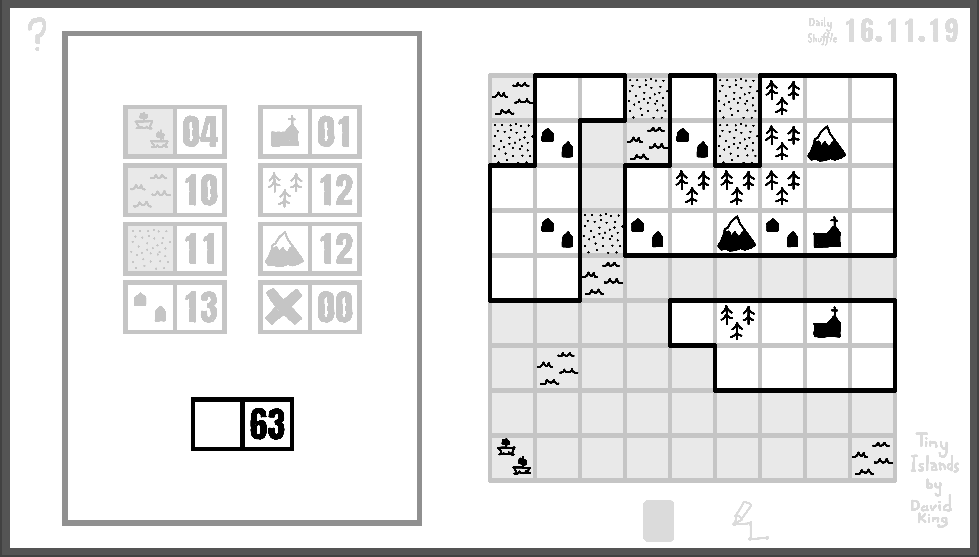 You should start using the #MyTinyIslands hashtag.

It will be easier to compare daily scores between players. Also, I think it helps the developer with building a trend or something.

Eyyyyyyy thanks for the suggestion. I didn’t know about it but will use it going forward. :D 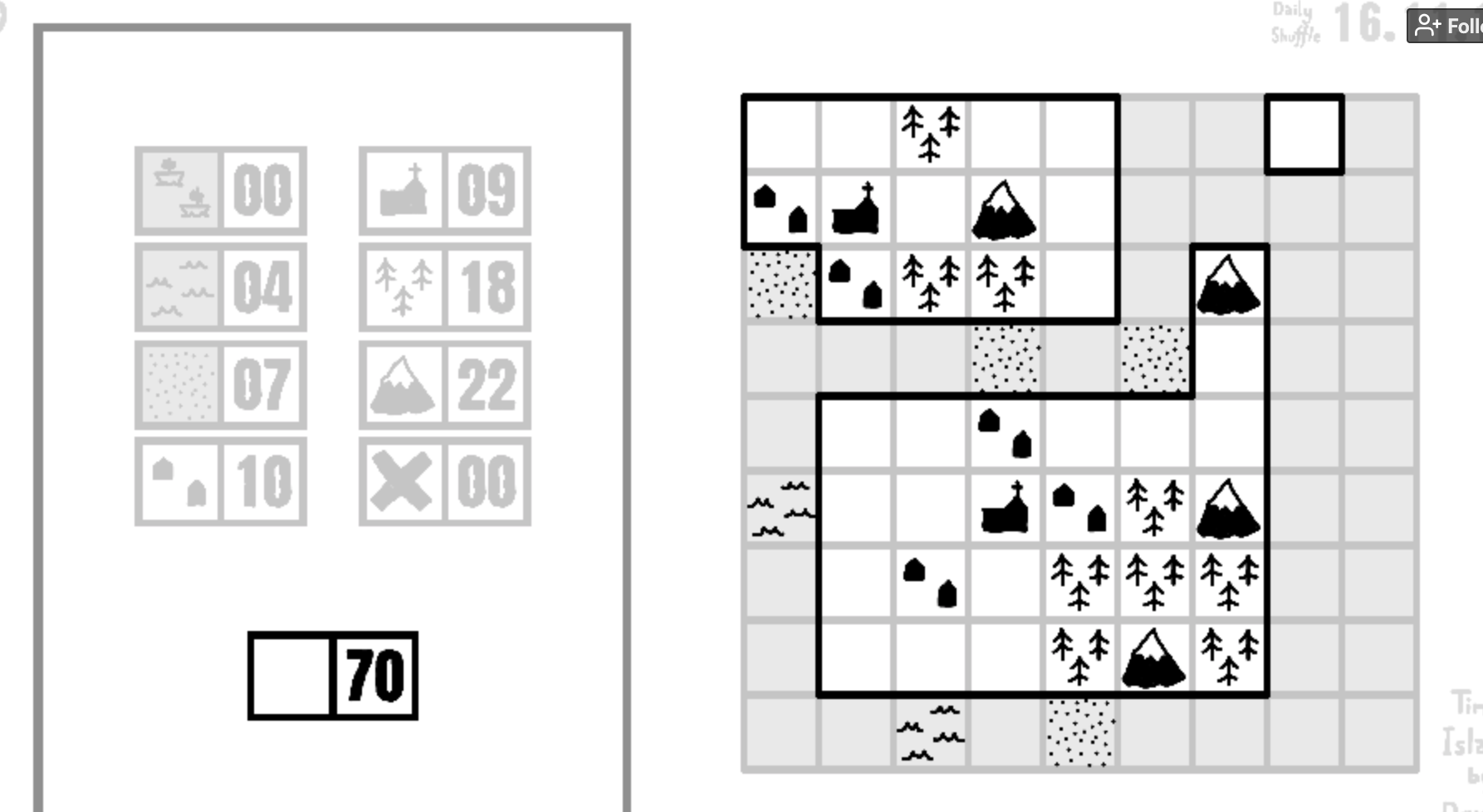 I'm liking this a lot.  I appreciate the "puzzle a day" aspect of it, and it's very playful. 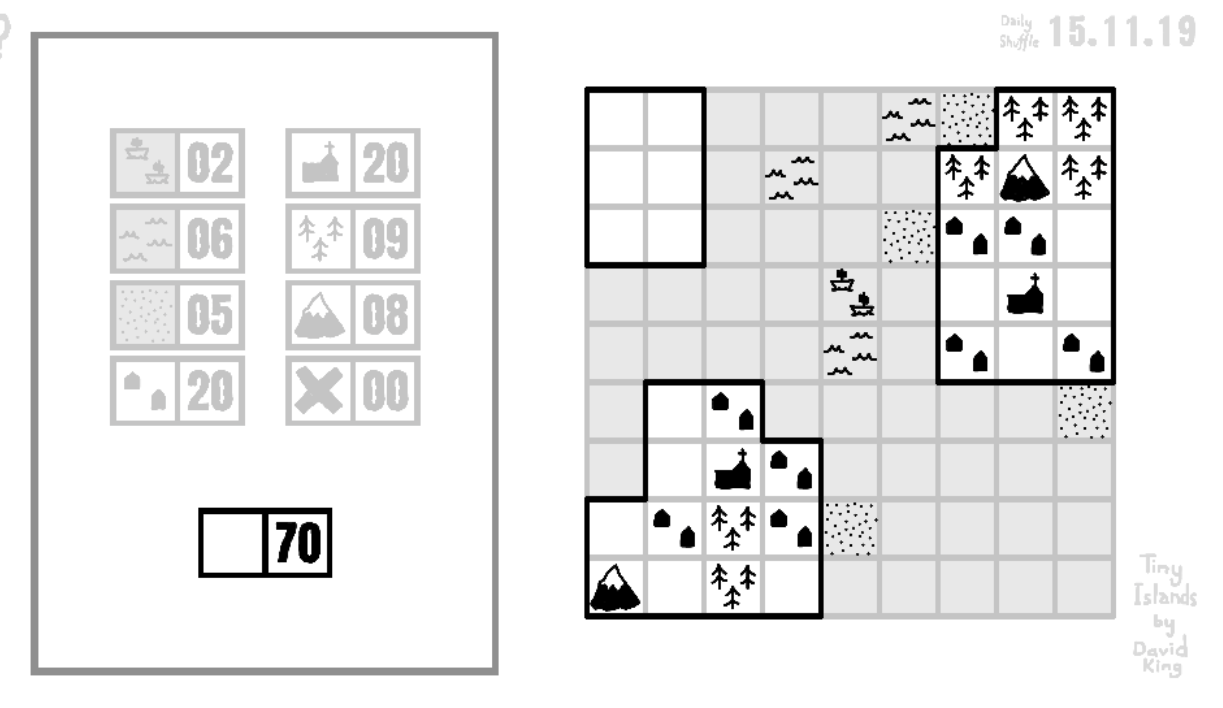 Not sure if I found a bug today though - the trees on the left island didn't count as touching and netted 0 points. Does diagonal count for them or not? 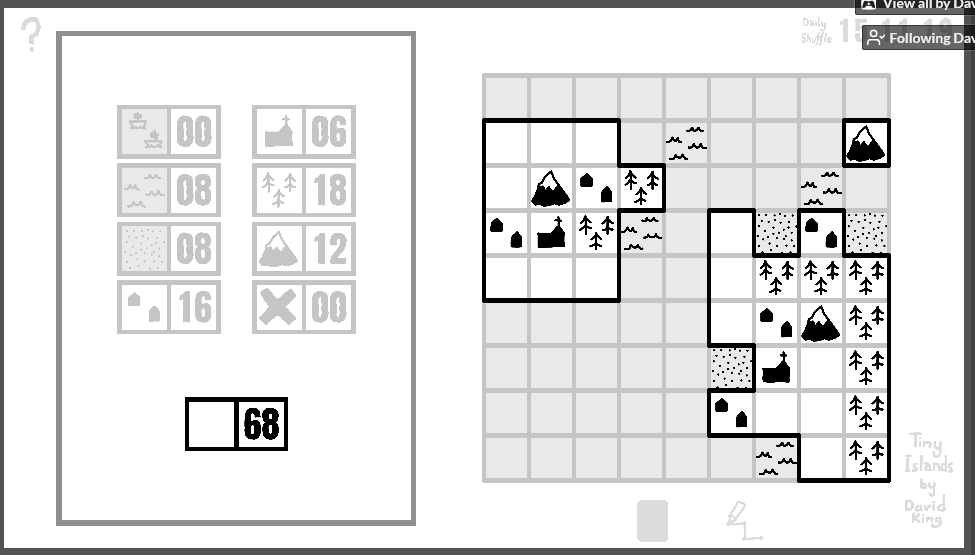 This is fun!
Misunderstood the beaches though.. Placed them all inside my poor islands.
I think I will have another go

I think it would be nice to mention in the rules that one can't draw islands that touch diagonally. 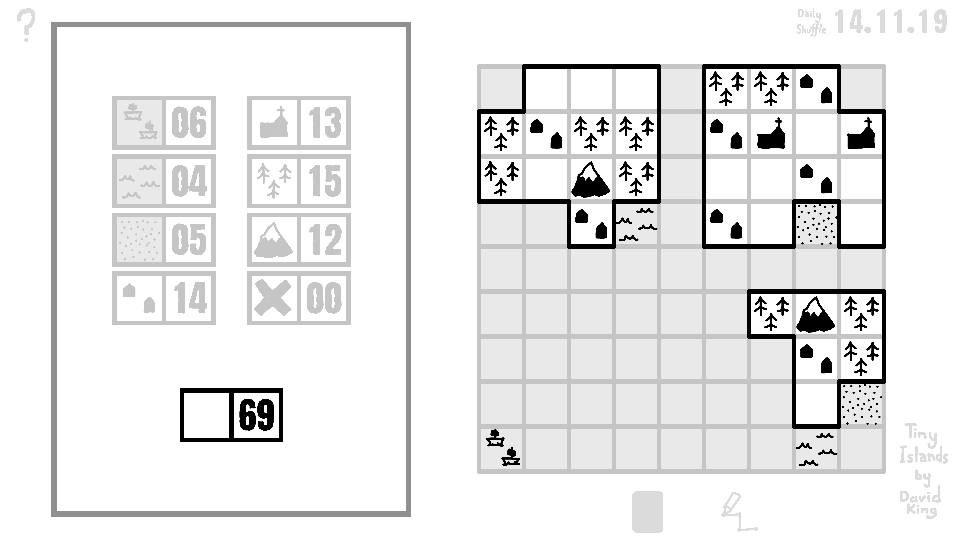 this is the best I could do :D very addicting and fun! 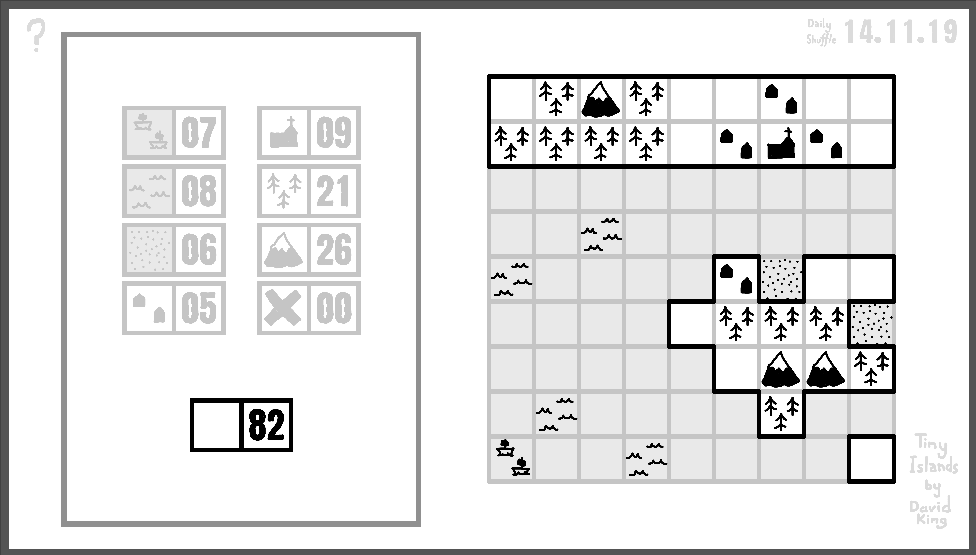 Would you consider releasing the cards/map as a printable PDF?

It was designed with this in mind, I'm still considering whether to do a print & play or try for a proper release.

Have you ever made a place for us to buy this as a physical copy? A purchasable PDF or full cards through Drive Through, Game Crafter or PrintPlayGames would be super cool! Thanks!

Reply
David King Made Some Games150 days ago

It's been something I've been thinking about, but haven't managed to quite work out how I want to do it. I'll post on this page when something does eventually happen. Thanks for your interest it inspires me to give it more time. 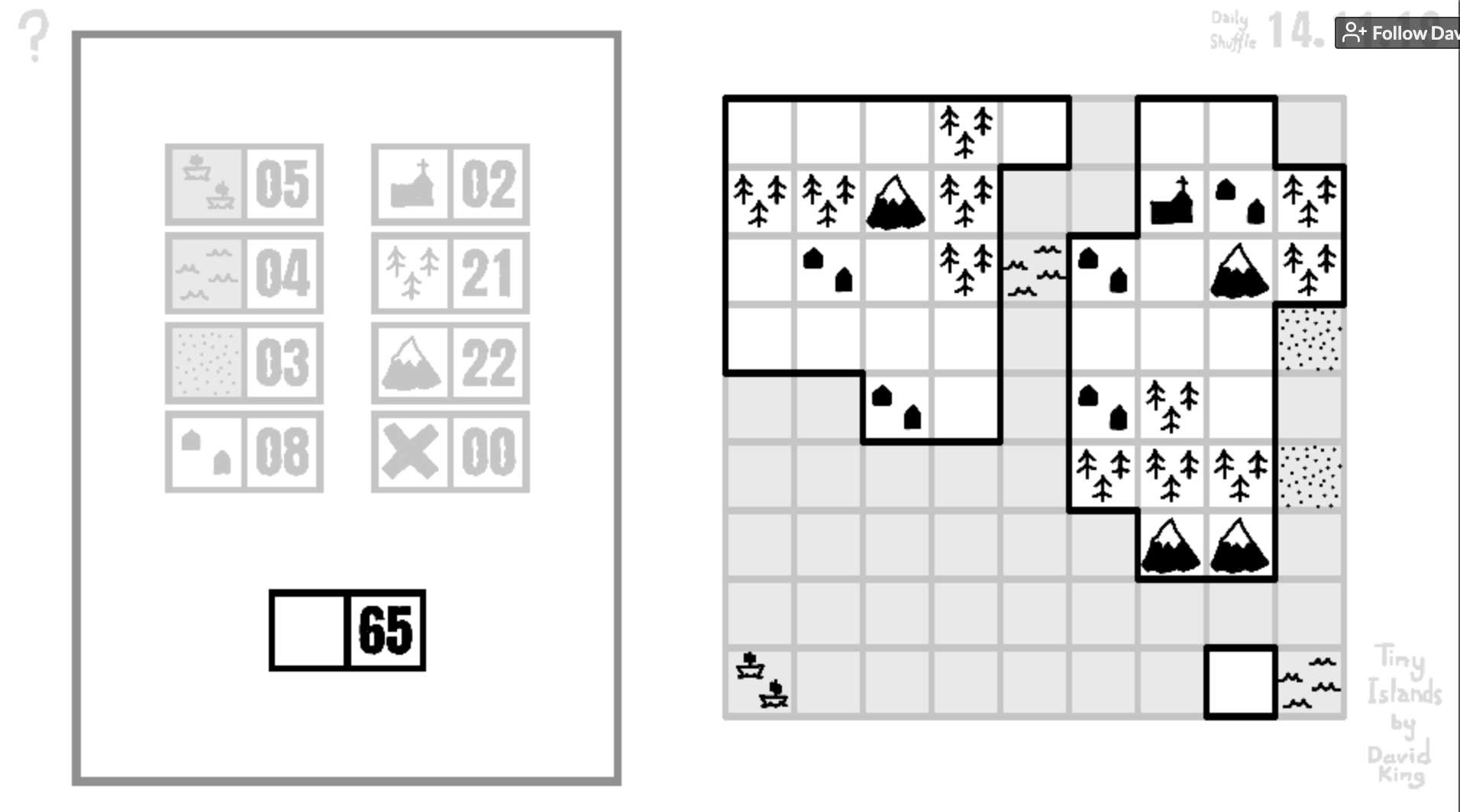 I looove optimization games. This one really tickles my brain.

I have the feeling that the size of islands should be scored as well. There should be a difference if you use all your pencil or have tiles to spare at the end.

Do you think that you could add a counter for the number of attempts made? 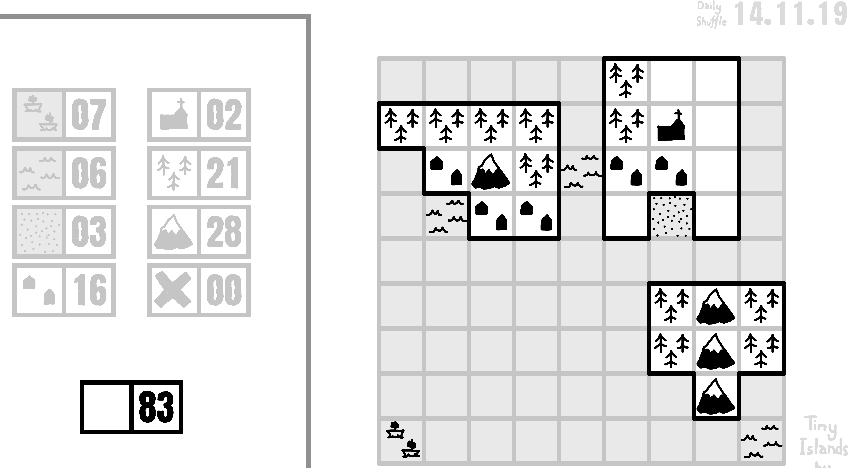 Small thing: the third phase of cards ends with the counter showing 2 left, so there are 8 items instead of 9. All the screenshots I've double-checked have 26 items in total. Could either add in those final cards or fix the counter.

any reason why the top right corner cannot be used?

Your screen resolution is probably as low as mine. The itch.io links like "rate this game" have bigger boxes than what is visible.

Weirdly enough, if you reduce the width further (resize your browser window) the menu will be moved and you should be able to use the corner

Edgecase / game break / softlock found! Turns out it can be impossible to draw the third island based on how badly you drew the first two.

Possible solution: Add a skip button that forfeits that drawing turn, or reduce the number of lines each island may have. 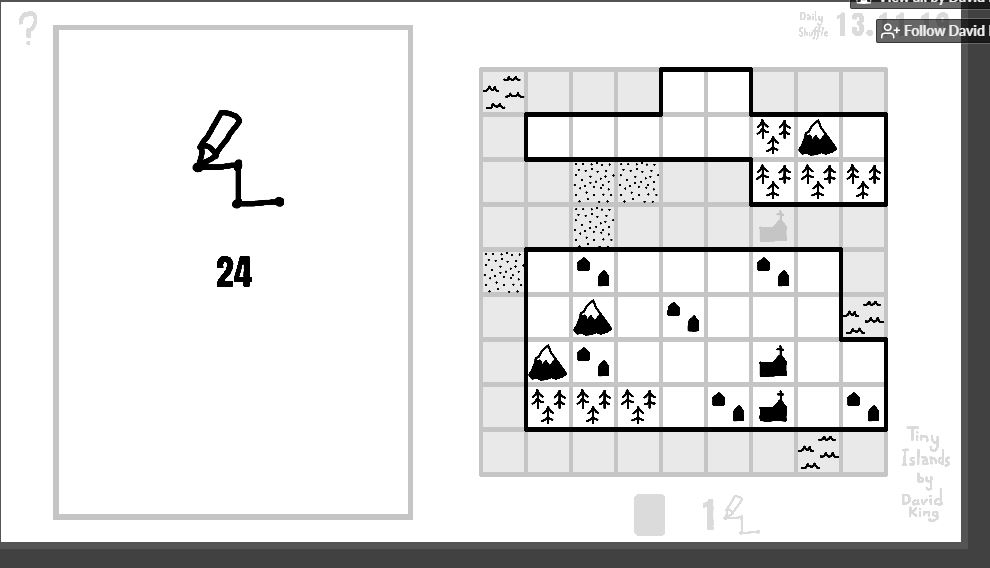 Well spotted - I'll work on something for the next update.

It is possible to continue in the provided example with a lake, which is certainly non-obvious, but it is also possible to construct a pair of islands that don't allow for more islands or any lakes. 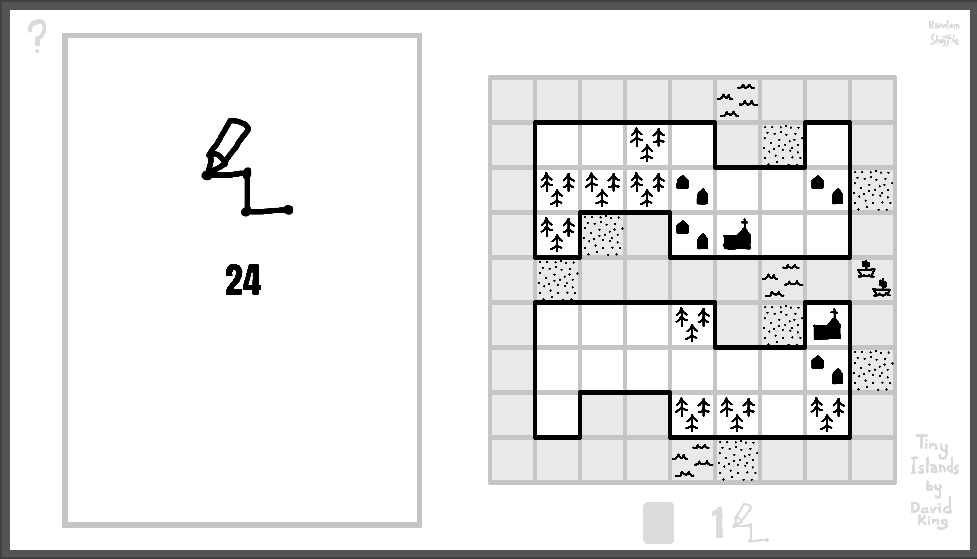 You're quite right. Good work.

Presumably you can draw a hole inside the larger island in this case? 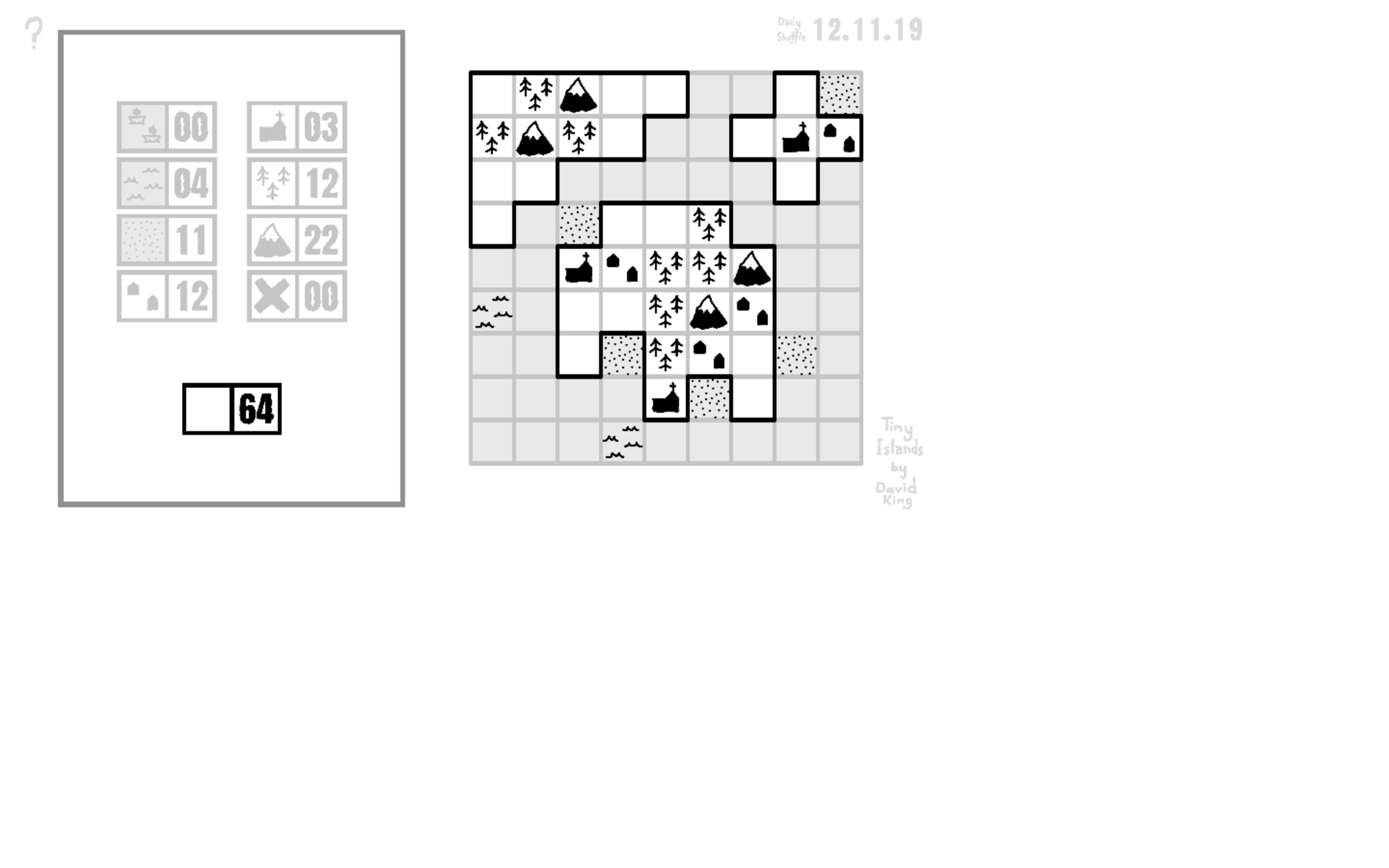 I have been playing the last hour and a half trying to improve on this design.

This is my personal high score. 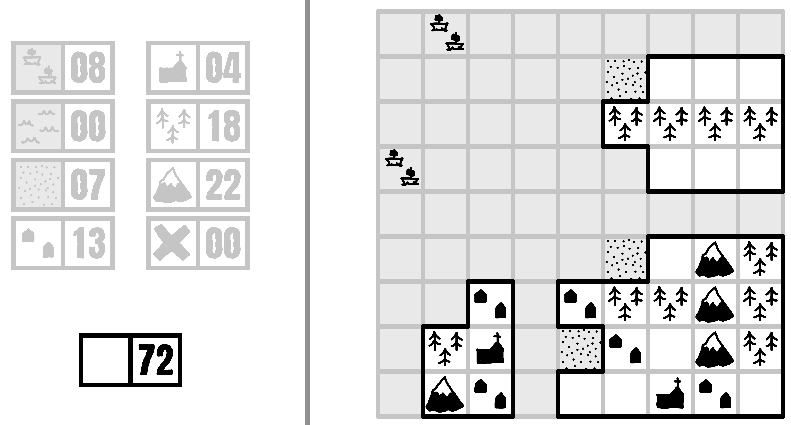 I consistently have problems placing anything on the tile which is on second row furthest to the right.

edit: I found the reason why - my screen res is pretty low so the itch.io menu items like "rate this game" and "add to collection" have an invisible bounding box that overlaps with the game

Great game, well done! The idea is a little similar to terraforming mechanics in my mars colony game. So I might take some inspiration from Tiny Islands :). Also, the combination of high score hashtag with a shared daily level is brilliant. 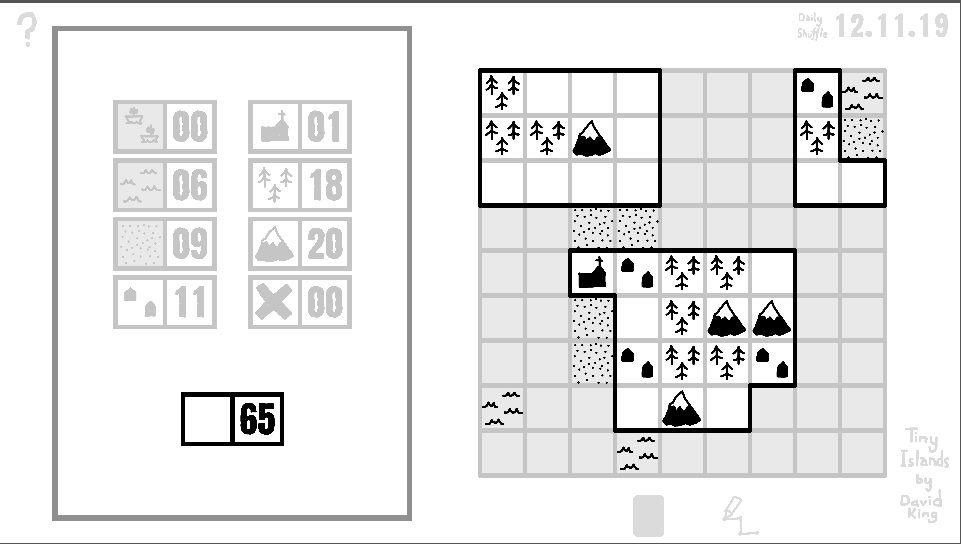 Brilliantly simple rules that make an elegant and calm game.

really cute game, loved it! thanks for making it  :) 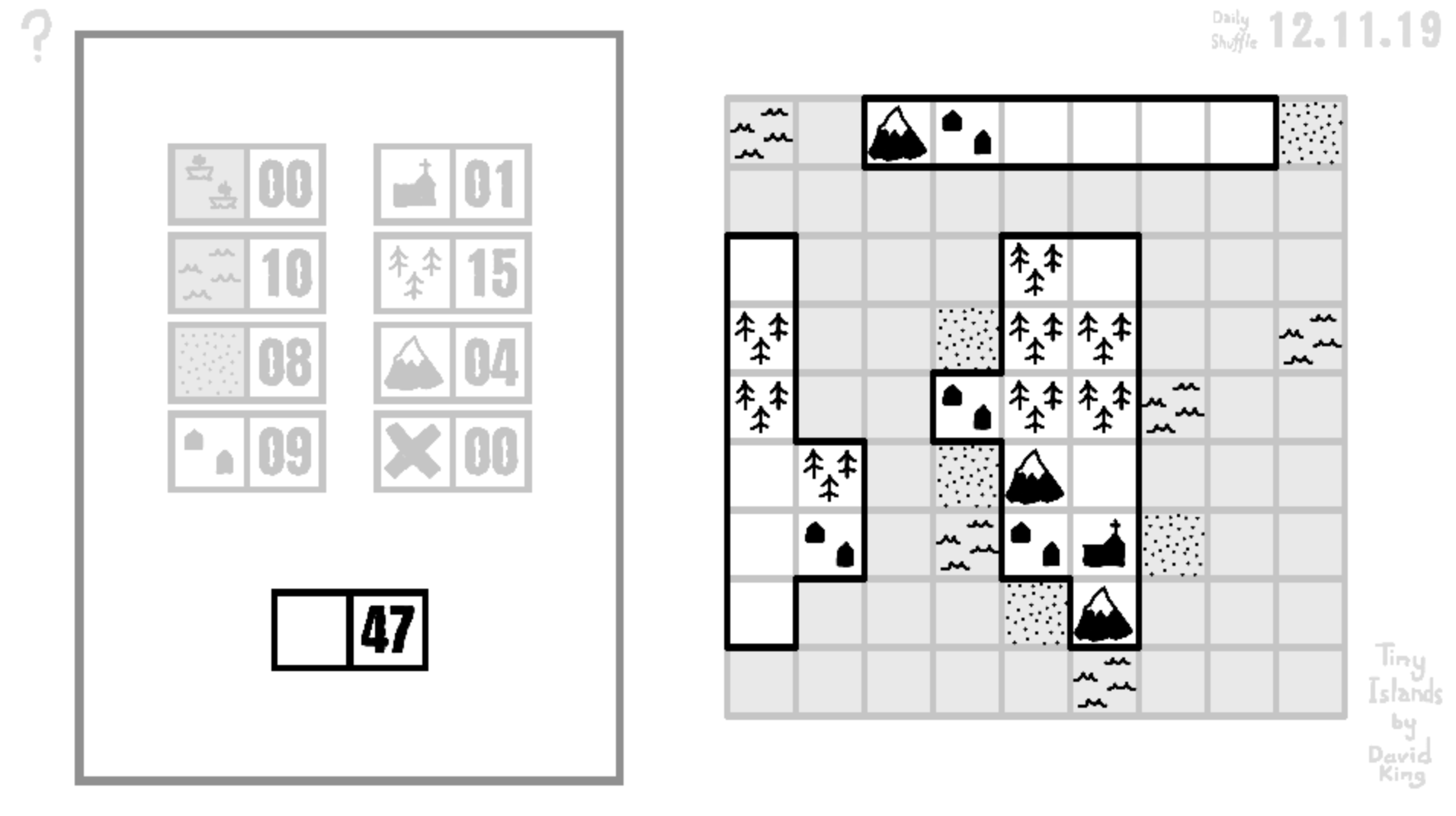 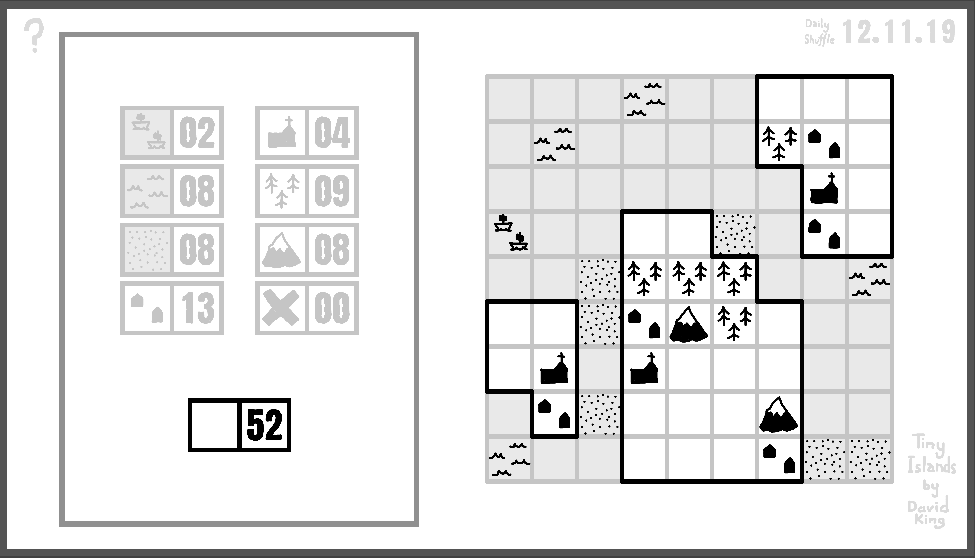 Absolutely love this game! And it introduced my to Itch as a bonus. I managed to get a score of 62.

Is there only one puzzle a day? Every time I try to play a new round, it provides the same tile and placement options.

Yeah, each day is a specific shuffle so you can compare scores with others and then try a new shuffle of the cards tomorrow.

Can't seem to finish drawing my island so I get stuck at that point.  Not happy with chrome on osx?

This is really fun!

It was annoying after the first round when it turned out all my work was for nothing as I didn't know I'd lose so many points for stuff being outside the lines when it should be inside and vice-versa. Also kinda annoying that it doesn't offer to save or screenshot or anything and just deletes your island when you click again on anything after it's done.

I admit that the first complaint is sort of my own fault for skipping the rules, but I think the reason I skipped the rules is because it was a lot of text all at once. I like that the cards each tell you how they work, that's much better than a big wall of text up front that you have no idea how to parse yet because you don't actually know anything about how the game works. I think it would work much better if you didn't show the individual tile's info at the start and just showed the other info, like the explanation of what "near" means. And also, during the border-drawing mode, show the info about which features/tiles should be inside, and which should be outside the lines.

Also, here's my second try at an island.

I love this, thank you. 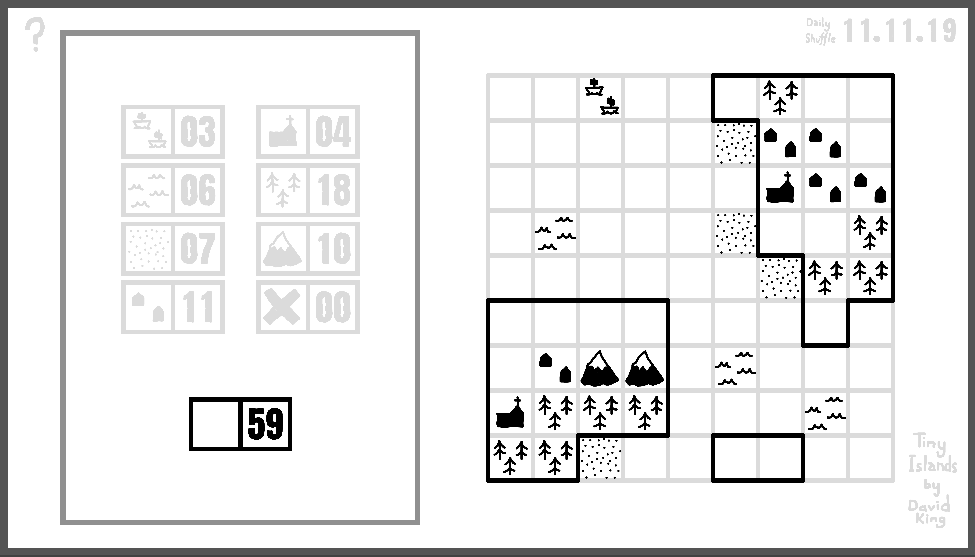 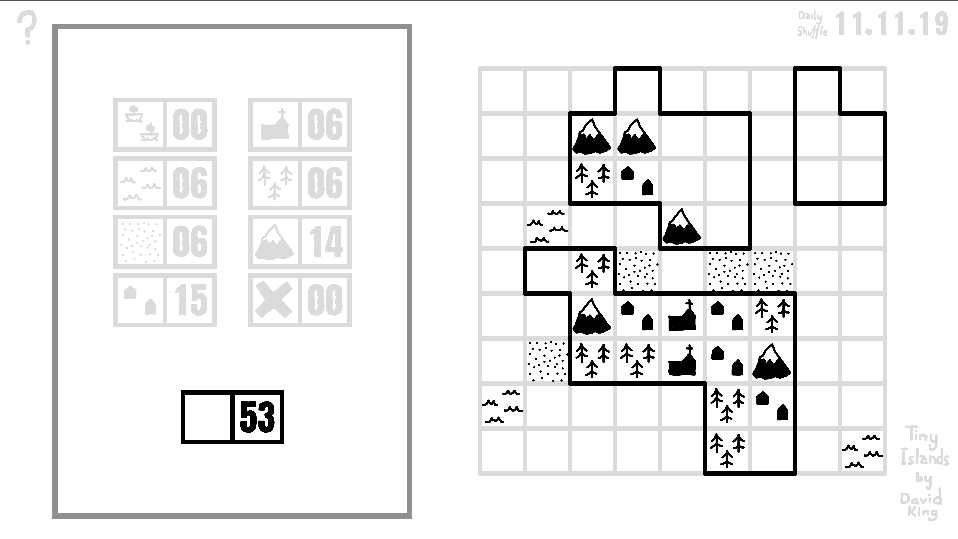 Reply
The Weight of UwU1 year ago

Really enjoyed this, one quibble with the way the rules are described: It says that the Forest like to be "near" more forest, which led me to incorrectly assume that groups could be connected diagonally.

well spotted. I'll sort that in the next update.

This is pretty fun

does this game work on an iPad? I’ve tried to run the game a few times on different days but the game never loads... the loading bar just sticks at nearly done.

I don't think it'll run on iPad in it's current form, due to the way it was created and how it is hosted. Thanks for taking a look though.

Aw, okay, I don’t have a proper computer... But it looks like a really nice game!

Awesome! Does "near other waves" mean within 1 square?

'Near other waves' means any of the 8 surrounding cells. I'm working on trying to clarify the language at the moment.

A clever concept, and a clever game.  I like it very much.

Thanks, glad you enjoyed it.

I'm not a big social media sharer, but I've had a couple hours of fun over the past few days playing this and making little maps.  It's darling, thanks for releasing it.  Beaches FTW.  Also you seem to have my father's title, first, and last name which gives me a giggle.

No need to share your islands if you don't want to. Glad you're enjoying the game.

it's still fun, and the islands are still darling