I can't explain how much I love this game. Every time I see an update for it, I go and play it again, and it's just so delightful and interesting that I never want to stop!

Do you have any plans for a printed/paper version of this game?

Please add a share picture button which will make a screenshot of your score and island. And then be able to download it or share on Twitter with the hashtag #MyTinyIslands. I love this game!!!!!!

This is an awesome game,

Maybe have a score tally going for the initial runthrough and then remove it for the main game,

Awesome stuff though, keep up the good work

**Also, I love that there is a daily shuffle that stays consistent, but keeps you coming back the next day,

Would love to see a community around this

I love this little game. The different game modes - daily and random - while using the exactly same rules, provide different experiences. In random, you have to constantly take into consideration whether placing certain locations will net you more points in the future (e.g. whether starting a new forest chain is a good idea or not). Daily always has the same cards inside, so you learn then and optimize the islands as much as possible, to score as high as you can.

However, the rules are not clear enough. For example, it's not specified that forests are only "touching" when adjacent orthogonally, which is contrary to what other locations, which only have to be "near" (i.e. adjacent orthogonally OR diagonally) something. Additionally, I've only learnt about creating "lakes" on islands through the comments. While it's often not the best way to score points, it would be nonetheless good to know that it's a possibility. Those are my biggest gripes with the game.

Next, about the game design itself:

Anyway, that's just my 2 cents on the game design. It's still an amazing little game!

Reply
David King Made Some Games20 days ago(+3)

Thanks for the feedback, I like the suggestion for the Churches, will try it out.

Haven't thought you planned to support this game more! I'm glad my feedback was useful.

i like the new churches. this is closer to how i first assumed they worked. i think it makes more sense and plays better.

Reply
David King Made Some Games13 days ago

Glad to hear it, thanks!

No one else seems to have this problem, but...  how do you finish drawing the island border?

I'm stuck in that mode, when trying to play for the first time, and I can't "finish" drawing the border (border drawing 1/3).

Ahhh!  I see, you have to CLOSE the shape to finish that turn, and you can build multiple islands overall.  This was not obvious from the help text provided in game.  :)

My best Daily Shuffle, by far! 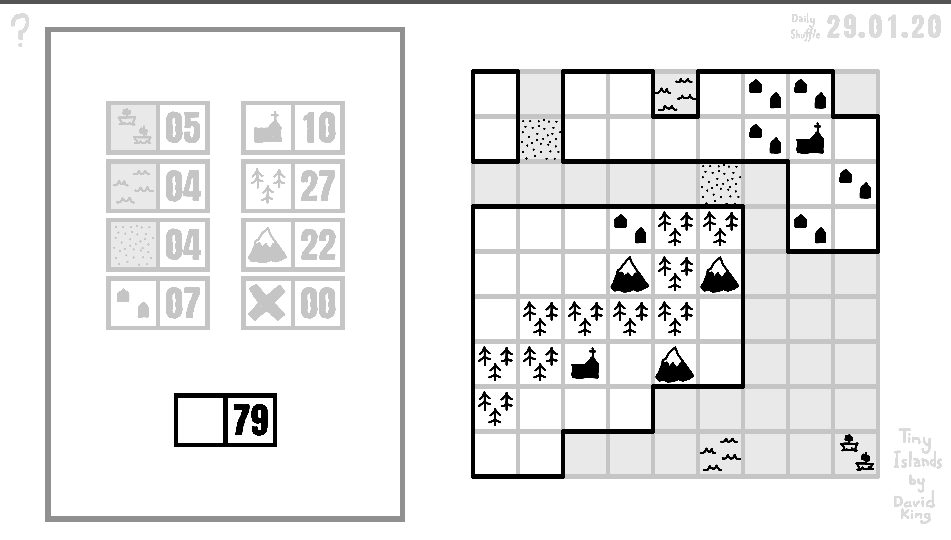 This game needs an android port. I love it so much. 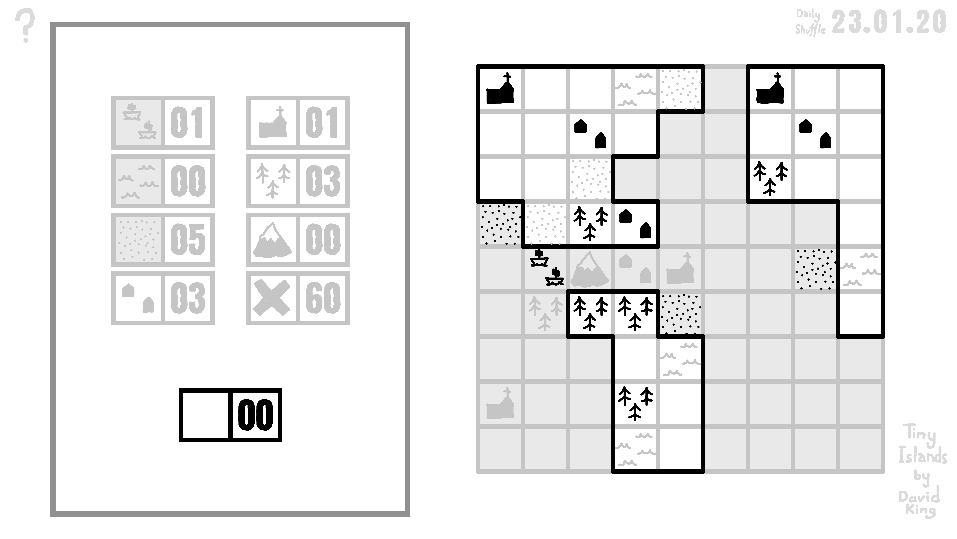 More seriously, common sense helps in this game, but it may be a false friend: for instance, I was placing beaches inside the island at the beginning.

By the way, if the rule was to place beaches inside the island and to score +1pt per side touching the sea, players would be encouraged to add “convex sections” (peninsulas sticking out) on their islands rather than “concave sections” (cavities). I think it shows in the most successful maps.

My first game I scored 1! Would play again

Hard game but very well designed. I recommend playing this when you need to kill time.

Wow 0 points on first try, i didn't understood it really but now I do nice game tho

Well on the 2nd try 43 points not bad

Really enjoyed the experience. I would love to play some sort of boardgame version of it. Too bad it dosen't have sound or music, tho!

55 on my first try! (But from that point on, it went worse haha)

really nice. thanks for your effort ! 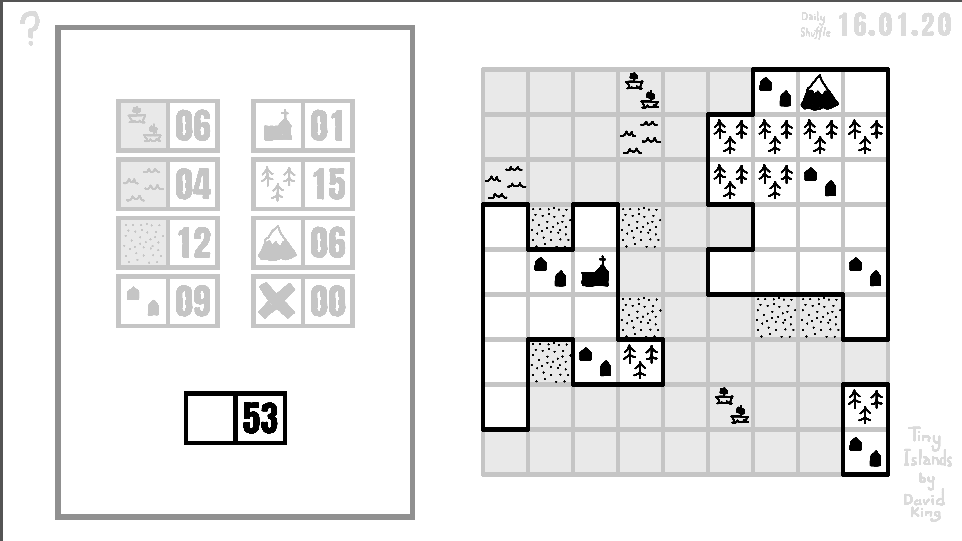 Reply
Will Fish41 days ago

Add basic colors to the game only with green grass and brown mountains would be quite beautiful :3 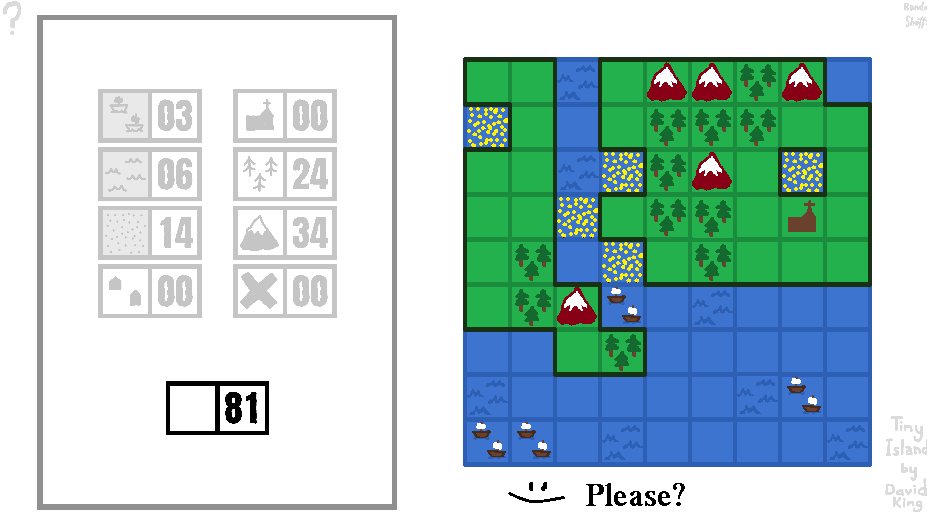 really fun and challenging... but i got only 0 points in 2 attempts

This may not be a huge score, but after MONTHS of topping out in the 60's and 70's, this first break into the 80's feels GREAT! 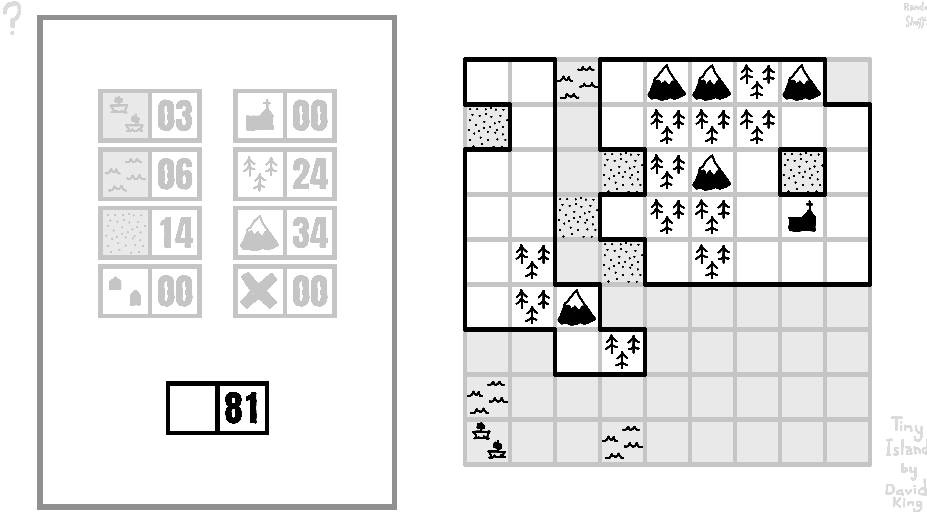 I was looking for a relaxing yet challenging game. Then I found this and absolutely loved it !

Really nice game! Scoring system is tough to remember at start but soon you get hang of placing the tiles. Design of the game is very well thought and quite unique:)

For anybody wondering what happens after 99 ... the square expands 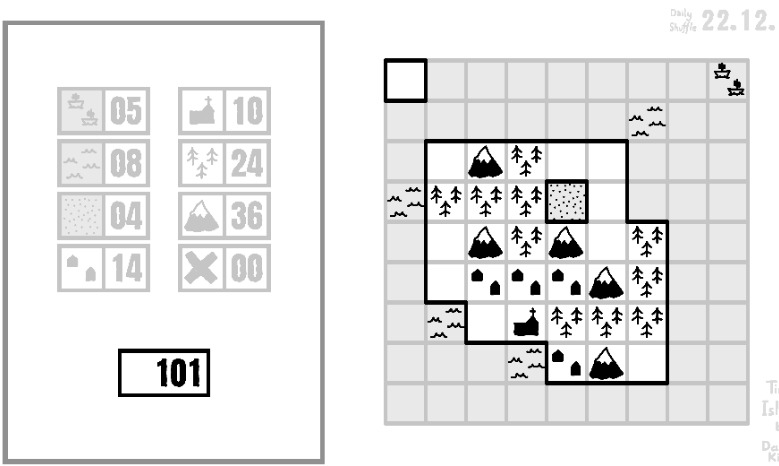 ipad version would be HELLA nice, then I would like to colour them in afterwards.

I love it! Would be great to be able to play it on my phone, but even if it was supported I don't think my screen is big enough that it would be satisfying. But I'm loving it on my laptop anyways.

I would also love to play this as a physical game, and I think it would work amazingly well as a competitive two-player game where each player is using their own board but are picking cards from the same pool.

After the final count it would be nice to see the score for each square.

How about some diagonal tiles in the game, running from corner to corner?

That, or some "picket fence" tiles that go either horizontally or vertically but running in a sort of 'cross-hatched' (herringbone) pattern?

Some feedback from my friends and I:

Its a lot of fun to surround mountains with forests, knowing you'll get two big point boosts.

I love having a choice that seems equal, but choosing one tile over another in the hopes that the perfect card will appear and bag me some extra points. For example placing a forest that almost connects two forests for instance and then having another forest appear that lets me connect them and rewards my optimistic thinking.

Houses are great! They give this extra meaning to every other card, tying everything together and rewarding you for careful placement. Fantastic design.

I think having only two cards which each give you very restricted choices is right. I was worried at first that this game wouldn't be as relaxing as the art style and concept suggested, and I think without this heavily restricted choice it might be. If my islands don't work out I don't feel stupid - the deck just wasn't stacked in my favour.

Some of the rules were unclear.  All my friends and I were unsure of "near" and forests "touching" when we first played. The boats also still confuse me. They don't care about diagonals as much as you think they should.

My friends and I have noticed we often have two nice islands and finish the game by drawing an empty and sad third island. It's a strange feeling to end the game like that. Maybe making the islands smaller would force you to use the third island more often? Or maybe just letting the player skip drawing a third island would solve it.

Check out this zero point boat. The gray search area filled up the board, but it didn't show any points. 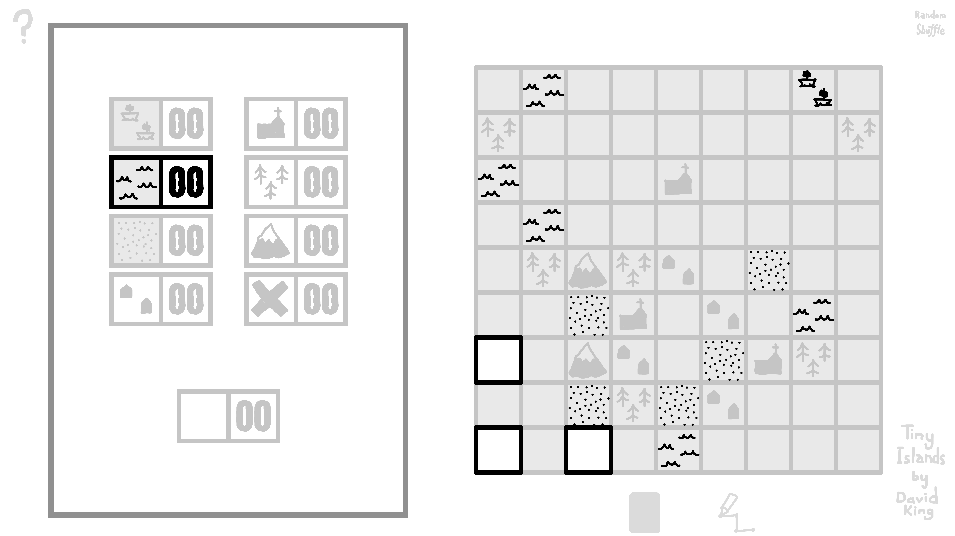 Reply
David King Made Some Games75 days ago

Thanks for the feedback, really appreciate it.

I didn't actually say, but it's a great little game. I love the design. Well done and thanks for the perfect five minute break between study sessions.

You can always make "lakes" instead of the 3rd island right? 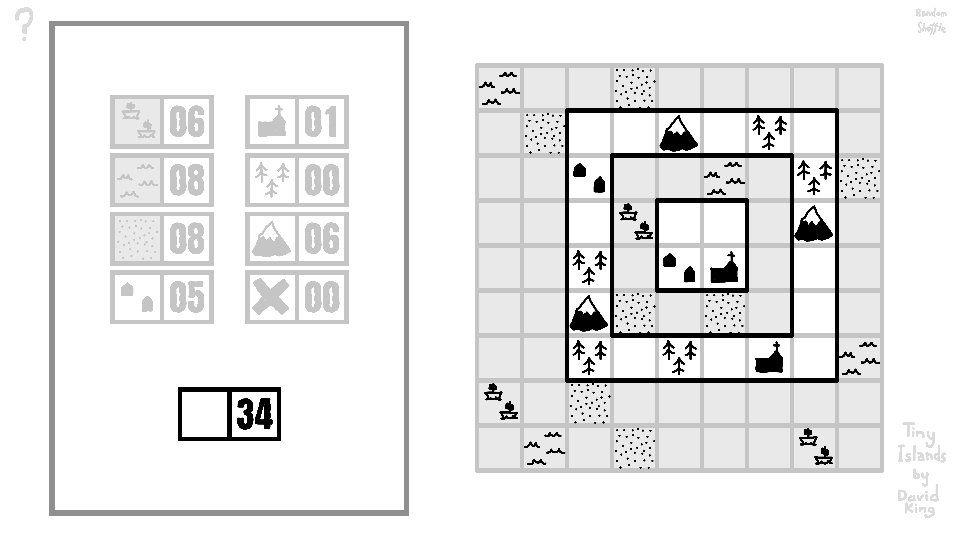 Reply
David King Made Some Games75 days ago

I had no idea you could use the lines to carve out the inside of an island! That's a fun challenge! 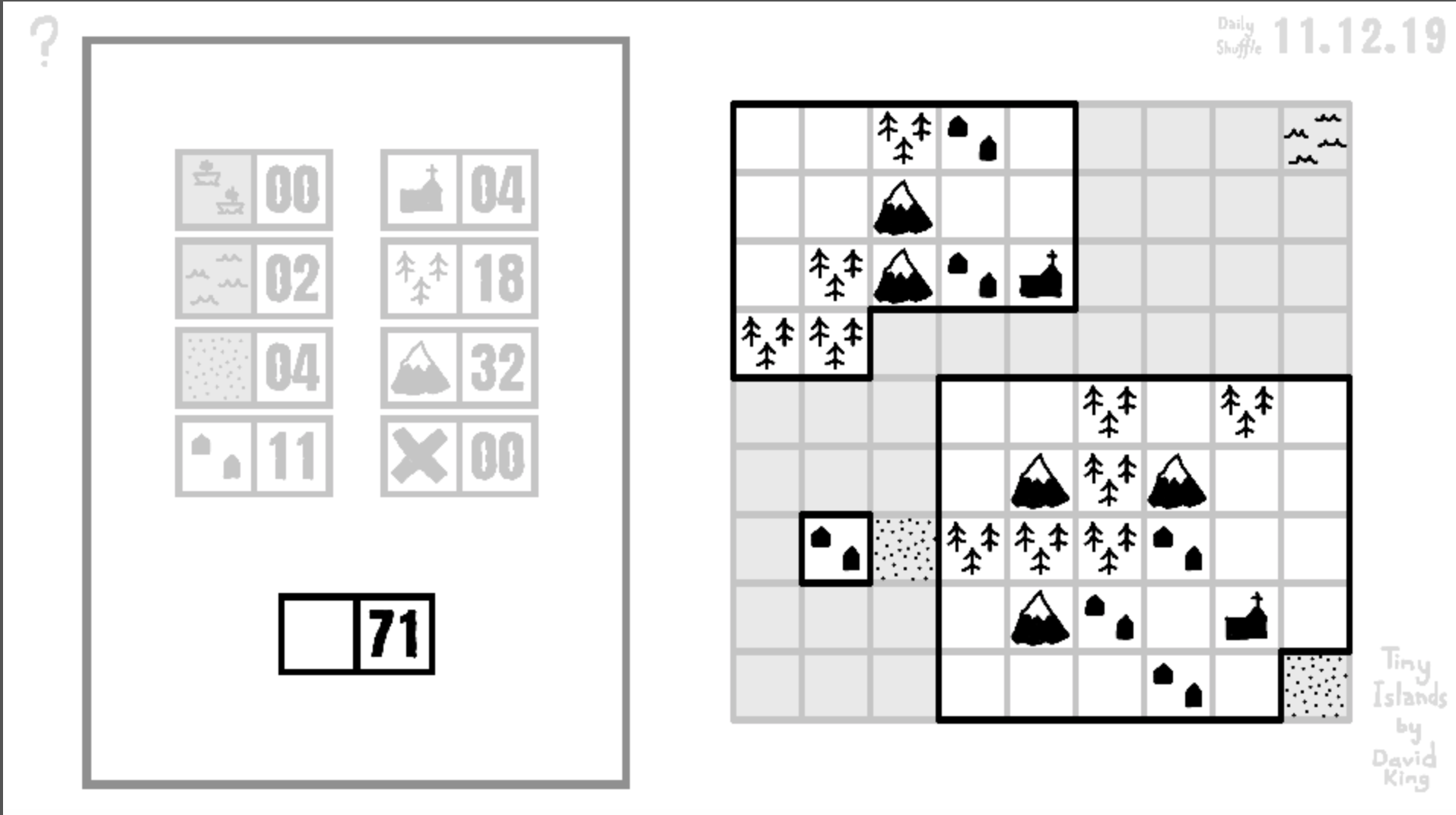 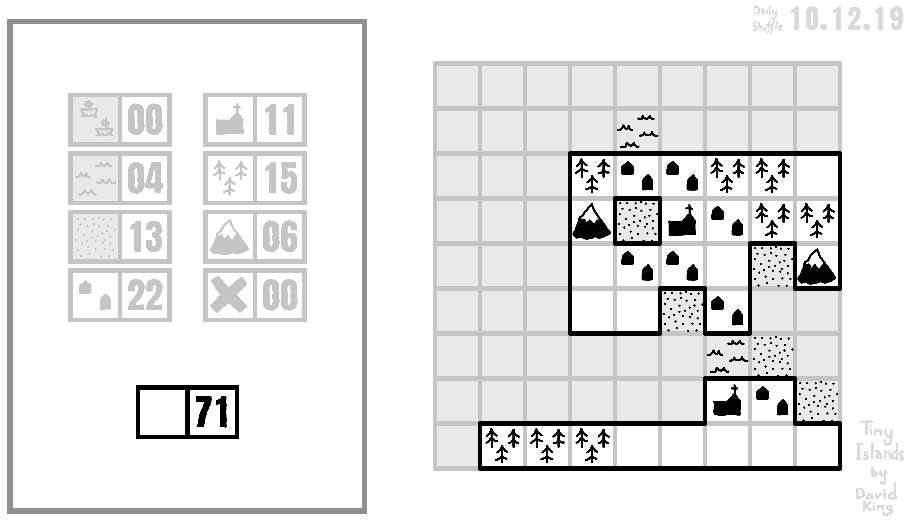 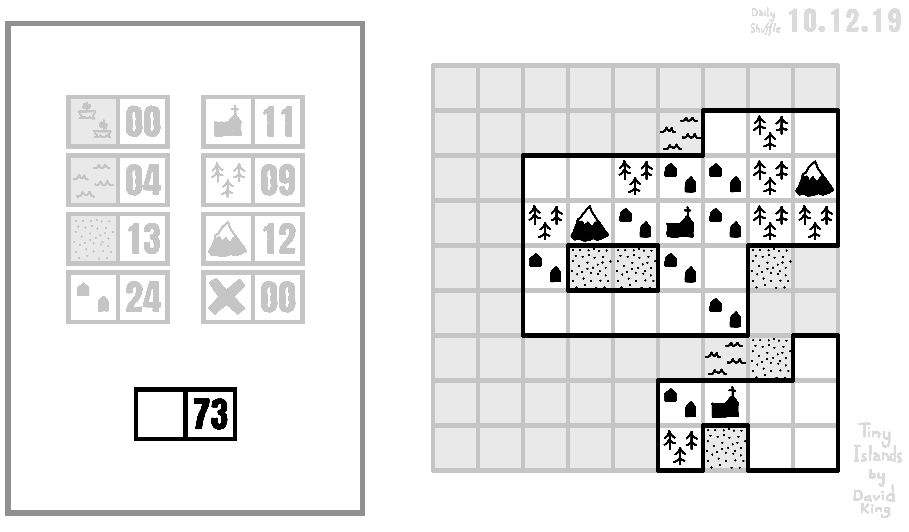 WHHAAAAT!!? I didn't know you could draw an island inside of another!

I know! A well known secret :)
I saw someone doit earlier in this thread.

You can draw one big island with a lake inside it and a tiny island in the middle.

I freaking love this game. 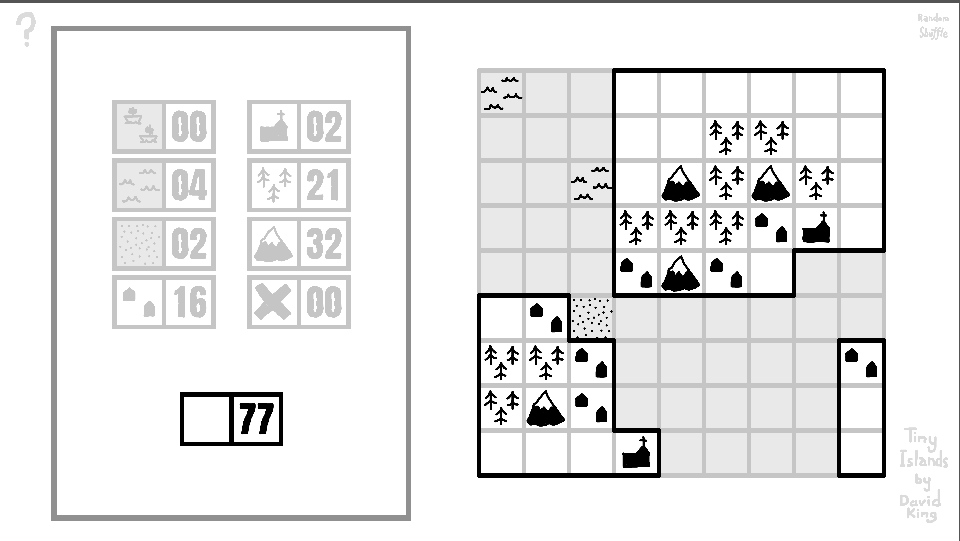 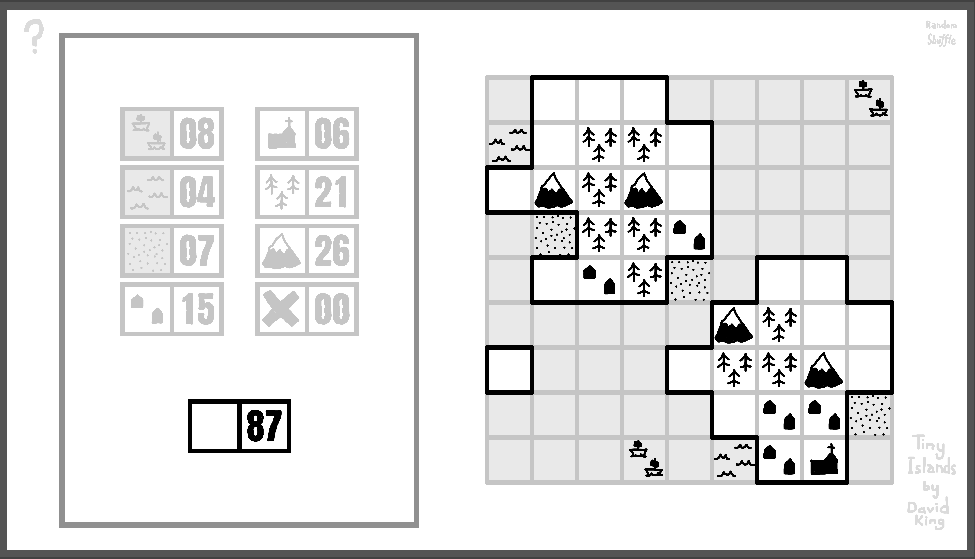 First try on the daily shuffle!! 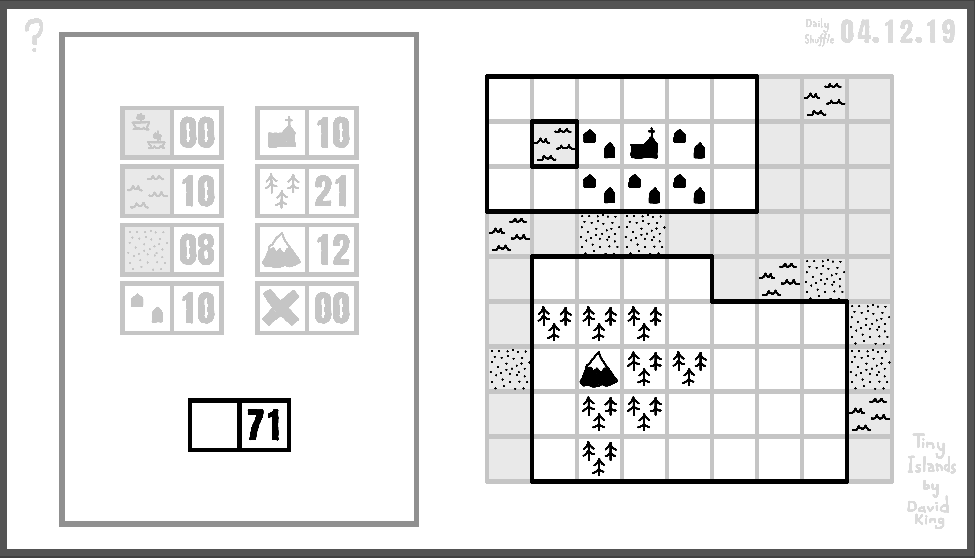